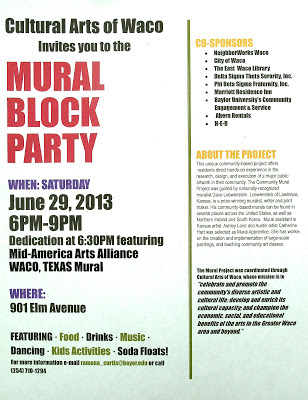 Projecting the design and community painting in East Waco

Before painting could begin we had to transfer the design to the wall. A long night of orienting the projector, tinkering with the computer and swatting mosquitos gave us the first glimpse of the design at full scale. A bunch of our design team showed up to see how the process worked and give encouragement. 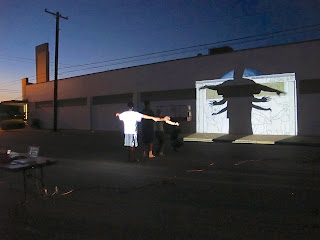 The next day at 10 am we started painting. This is the icing on the cake for us after nearly a month of meetings and design work.  Big areas of saturated color begin to assert the forms of the design attracting passersby from Elm Ave. It's hot so in between painting shifts we need to pause, pant and drink underneath our shade tent. In front of the design coming into focus people recall the stories and characters depicted in the mural. Over the weekend more than eighty volunteers came to add their brush strokes and help to transform this corner of East Waco. 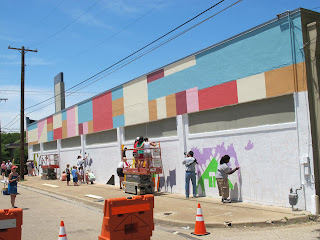 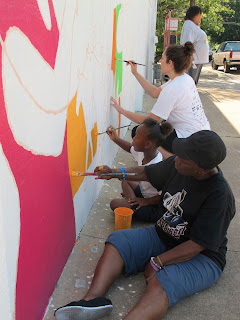 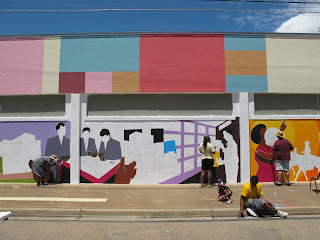 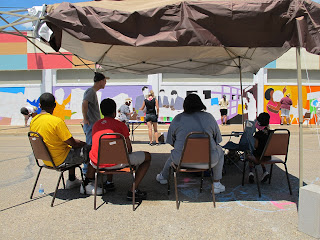 Going from community meetings to mural design is like going from watching a play as a member of the audience to writing the play. It's a big jump. In our process, people who attend our community meetings get to choose themselves if they want to be on the design team. Usually we get ten to fifteen willing to commit the time. In Waco we got thirty-nine to sign-up. 39.


We crammed an oblong circle of chairs into an unused room at the back of the library. As an ice-breaker we played a game of telephone. It's that old parlor game where the first person whispers a message to the person next to them, and then they have to remember it and whisper it to the next and so on until the message has made it all the way around to the last person who stands up and shares aloud what they think they've heard. The message I started the game with was "Our mural will  be twice as good as any by Diego Rivera or Michelangelo." Often in telephone the message is completely garbled and meaningless by the time it gets back to the first person. That's why I was so impressed when the last person in our group stood up and said "The mural will be better than Leonardo DaVinci's." Sure a few of the facts were wrong but the main meaning of the message had survived, that being that our mural will be awesome. 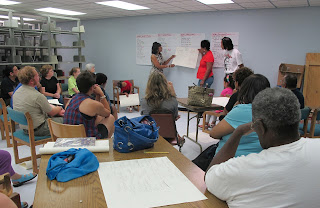 During presentations at one of our design team meetings, one group made four lists in relation to the neighborhood. They were: Good, Bad, Fix, and Need. Under the Bad list one item caught our attention - Negative Billboards and how this affected people's perception of East Waco. Thinking about this I was reminded of Steven Powers' "Love Letter" project in Philadelphia where he made a series of hand painted billboards that pay homage to the tradition of sign painting. I shared this with the design team and then suggested that we try making our own signs of inspiration and community pride. We also looked the murals of Bernard Williams who often uses pictograms to create open ended narratives.

The week working with the design team was fruitful - lots and lots of material. Our job was to edit, translate and transform what we'd been given into a mural design in ... four days.

Our solution was to keep the three wall areas intact and use different design approaches in each to tell East Waco's story. At the bottom (in the six framed panels) we decided to design a more or less straightforward series of historical and contemporary scenes with references to old Elm Ave., the Alpha Theater and Paul Quinn College. Above them, Catherine took on the task of creating thirty-six East Waco inspired pictograms that could fit into the old window frames. And at the top of the wall Ashley's job was to design an interlocking collage of signs inspired by our design teams' work and referencing some of the existing hand-painted ones we'd seen in the neighborhood.


After getting the thumbs up on our initial draft from the design team and city, we began to put together the color study using a cut-paper collage technique. This is an ongoing process that tries to stay one step ahead of the painting going on outside. In the meantime, we primed the wall and transferred the line drawing so everything would be ready for community painting days.

A walk along Elm Avenue

The East Branch Library where we're working is located at 901 Elm Avenue. The building has been a library since the 1970's when it took over the space from the original tenant, an H.E.B. grocery store. Nowadays it's one of the few active spots in what was once a thriving retail district. 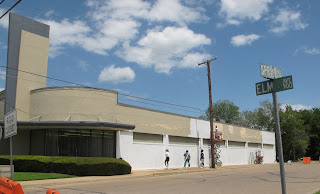 In our research for the mural, we took a couple hours to walk along Elm and see what evidence there still is of its bustling past and to get acquainted with what was happening today. At first glance it doesn't appear that much is happening at all. There are countless abandoned buildings and just as many forlorn staircases leading up to empty lots. But look a little closer and you'll see signs not only of a more active past but also of new life just beginning to emerge on this storied avenue. 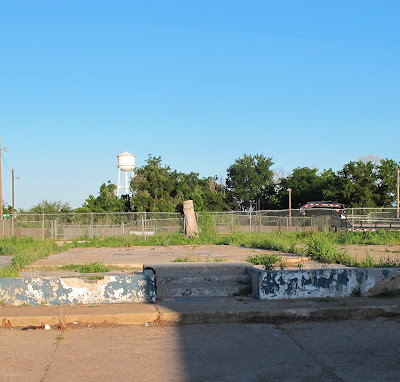 Old maps show that more than one hundred years ago Elm Ave. had a good cluster of retail buildings a twelve square block residential neighborhood and a train station.


Here's a glimpse of Elm in 1946 and the same view from just the other day. 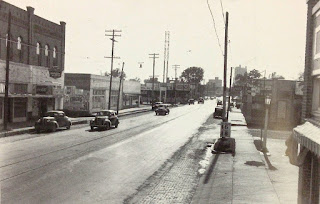 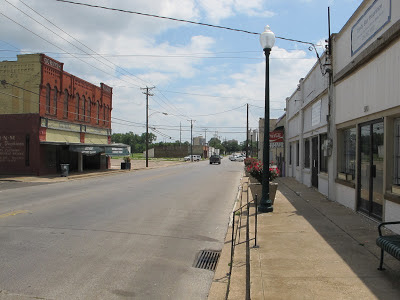 Elm feels a little lonely and abandoned today - not many people on the streets and lots of hand painted signs fading into obscurity. But on our walk we encountered remarkable echos from the past like these names from the senior class of 1925 embossed in the sidewalk in front of the Paul Quinn Campus, 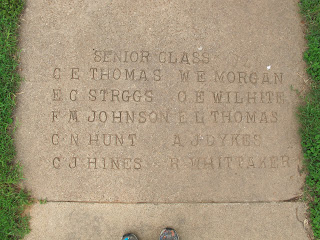 and current efforts to cultivate a healthy future through community gardens. 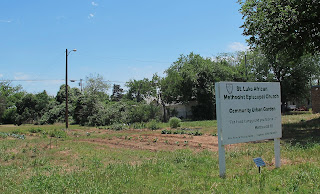 We missed it this spring but there's also a new arts festival here called Art on Elm that brings artists and musicians from around Waco to celebrate the culture of the East side. 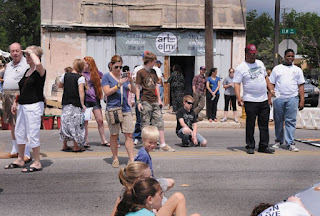 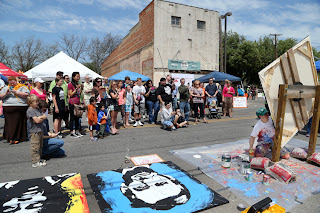 Our most welcome discovery was the growing family of murals that have begun to sprout along Elm. Supported by NeighborWorks, these murals by local artists like Ira Watkins, Chesley Smith and Sam Torres reflect a range of themes and styles. Their work beautifully enhances the neighborhood and points the way toward a creative renaissance on the horizon. We are grateful to be able to add one more to this growing outdoor gallery. 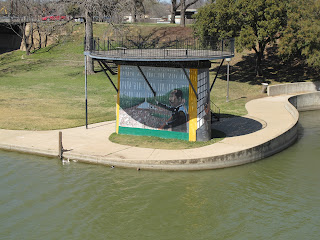 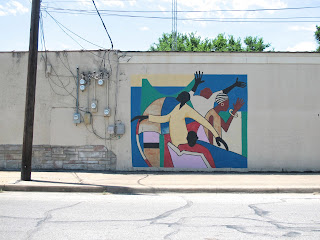 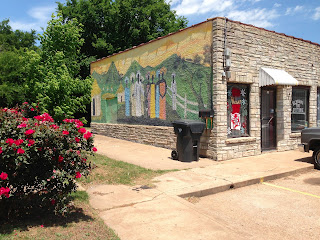 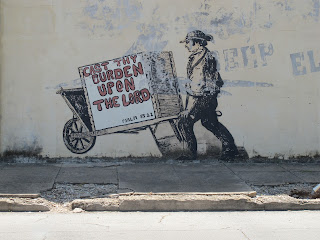 New article about the East Waco mural project in the Waco Tribune.
http://www.wacotrib.com/entertainment/accesswaco/art/east-waco-mural-takes-shape-with-help-from-public/article
Posted by Dave at 4:04 PM No comments:

In all the years I've been doing murals, I can't recall ever having community meetings in the building I'd be painting on later - another advantage of working at the East Branch Library. The mural wall, our design studio, community meeting space and main research source (the East Branch is the only library in Waco with an African-American section) are all in one place. Here in Waco over the last week we had three community meetings at the library. We also visited Rapoport Academy on the old Paul Quinn Campus, the Rotary Club, the Fred Batts Leadership Luncheon, did a live radio interview with McLennan County Commissioner Lester Gibson on 104.5 The Beat, and met with the Waco Library Board. Tomorrow will do an interview for the city's local cable channel.

On the afternoon of our first meeting, we put out twenty-five or so chairs expecting fifteen or so attendees. Over forty came and nearly the same number the next two nights (if you include those who chose to listen to my presentation a second and third time). Clearly this is a community that cares about how it is represented.

After a go-around where we introduced ourselves to each other and my presentation looking at the roots of community murals, we opened the floor to comments, questions and suggestions. Right off the bat we heard about a past that's nearly non-existent in Waco's local history books. In all the sources that we could find claiming to tell Waco's story, African-Americans hardly existed.

Our community groups recalled places and people long since gone. Schools like A.J. Moore razed, businesses like the great Alpha Theater closed, dance clubs and homes left to decay, and Paul Quinn College relocated to Dallas. We heard about great teachers and restaurants, about Elm Avenue, Bridge and Clifton Streets and how they used to thrive. It was nostalgia for sure but also a very important way of rekindling the spirit of a place that's hard to imagine when you walk around today. And since the history books don't show it, the stories and images they evoke have to be preserved through oral tradition.


Most of the comments and discussion related to the community's history. Notably fewer were comments or suggestions about how the community wanted to move forward and address the many challenges it faces. When pressed we heard that yes there was great need for a grocery store (ironic since the library we were in was a grocery store until the mid-70's), bank (if not an ATM) and post office all currently absent from East Waco. How to get them was a more difficult problem. The only economic development on the horizon was coming from Baylor University in the form of a giant new football stadium that will overwhelm East Waco with traffic on game days.

Some attendees expressed concerns about the neighborhood becoming gentrified and local residents and small businesses getting priced out. It's a legitimate fear. There is talk of New Urbanism, food trucks and loft apartments being perfect for Elm. Our apprentice Catherine said she's seen it before on Austin's eastside where a formerly low-income multiethinic neighborhood is being recast as a playground for hipsters and other up and coming professionals. And Ashley and I are familiar with a similar scenario back home in Lawrence where our east side neighborhood is suddenly fertile ground for real estate speculators and arts district consultants. For some reason, it always seems to be the east side.
Posted by Dave at 9:15 PM No comments: