Check out the new National Public Radio project "Participation Nation." Our mural project in Arkadelphia is featured in a recent post.

We are excited to announce the location for Arkadelphia's mural. The wall is located on the west side of the Honeycomb Restaurant at 705 Main Street. It's probably the largest and most prominent wall downtown. It will provide great uninterrupted sight lines and a delicious place to take our lunch breaks.

Honeycomb is a component of Group Living Inc., a private, non-profit organization providing community services to people with developmental disabilities.  Their website says that the organization's purpose is to  "help each individual served reach the highest level of independence possible and to become an integral part of the community."

The website goes on say that the "Honeycomb Restaurant, a sheltered workshop, exists for two main purposes:  one, providing employment opportunities and normalization skills for developmentally disabled adults and two, providing a downtown restaurant with good, affordable food.  Approximately fifteen clients work at the Honeycomb either full-time or part-time." 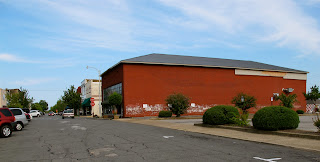 The generosity of the folks at Group Living extends to our project as well. In order to insure that the mural will have a good long life, Group Living will be coordinating and providing support for both cleaning and tuck pointing the building. We are grateful to Executive Director Jane Lucas and all of the other folks at Group Living for partnering with us on this project.
Posted by Dave at 8:44 AM No comments:

Waltzing into a community you've never been to and introducing yourself as the artist who is going to paint the town mural is risky business. Even when you've been invited, the expectations can be unattainable, especially when its a community's first big mural. And it's understandable, people want to make sure that their ideas are included and that certain important figures or historical events are not overlooked. And occasionally others want to insure that some things from the past or complicated current realities are not committed to paint.

I am well aware of this, and am quick to admit that it's nearly impossible to include everything that is suggested by participants in the final mural. To do so would make something more like a tourist brochure and less like an artwork. Instead I suggest that we aspire to make a mural that is like a visual poem or folksong, with an emphasis on symbol and metaphor, supported by specific references to place, people and history.

Encouraging  participation begins with open community meetings. This isn't just to get 'buy-in' (a phrase that sounds suspiciously like a bribe to me), it is because the knowledge and experience of residents are what will shape the content of a mural that is authentic and embraced by them. 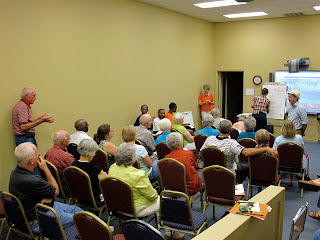 This week Jordan, Ashley, and I began this process by leading two community-wide meetings in order to introduce the mural project, give folks an opportunity to visit with us, ask questions, and begin to imagine the mural. Our meetings were held at the Dawson Education Cooperative which occupies a clutch of neatly kept buildings in downtown Arkadelphia. 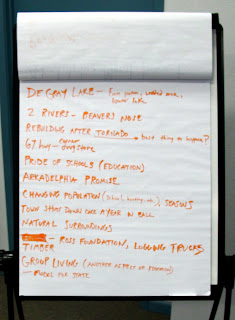 Dawson is a service organization focused on increasing student achievement across twenty-three districts in Arkansas. Through workshops with teachers, distance learning opportunities, and direct support, Dawson is actively engaged in providing resources to districts beyond what they could provide themselves. Choosing Arkadelphia as their home has added to the community's growing reputation (sometimes referred to as the 'Athens of Arkansas') as place that prides itself on learning and education. 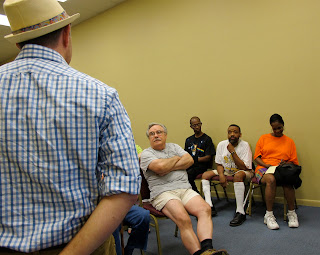 Our meetings were both well attended. We got great initial feedback after I gave a presentation about the mural process and the background of the Mid-America project. The biggest question we heard was, where is it going to be? At the time we'd narrowed the search down to two walls. Later this week we'll reveal which one was chosen. Stay tuned...
Posted by Dave at 8:42 AM 1 comment:

Our home in Arkadelphia, Arkansas 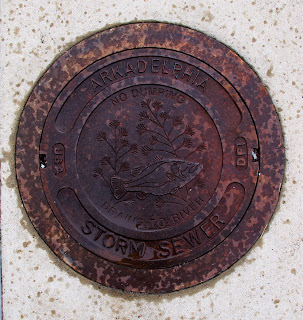 There are a couple different stories about how Arkadelphia got its name. No one is certain which has more truth. What we do know is that the town's first name was Blakelytown, and that the change gave the placename a new intrigue and poetry that inspires locals to dream up origin myths, and visitors to imagine great boats filled with east coast refugees.

To get here, we drove through Joplin, MO where we found that our mural from last year has a new info box for visitors who stop by and want to know more about the project. Thanks to the folks at Dixie Printing, visitors can now pick up a beautiful free postcard of the mural that gives details about the project. 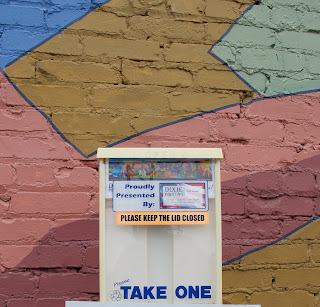 Arkadelphia is framed by the confluence of the Caddo and Ouachita rivers, in an area known for a beautiful natural environment and wealth of outdoor recreation opportunities. The region's lush pine forest is one of those attractions and also one of the areas most important economic resources. This is timber land. Spend a couple of minutes downtown and you'll see a convoy of trucks along Route 67 hauling the long tapered pine logs.

Entering Arkadelphia past one of the town's brand new liquor stores (the county went wet only last year) and through the ravine that divides the rival campuses of Henderson State and Ouachita Baptist Universities, we  found the address on McNutt Street that would be our home base. Project coordinator Farrell Ford met us there at a beautiful brick house adjacent to the Ouachita  campus.  The plushly decorated two story colonial, which was a B & B for years, is now on the market, and we muralists are just temporary caretakers. We are grateful for it, especially the porch. 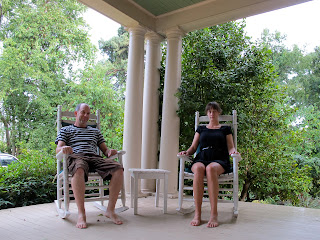 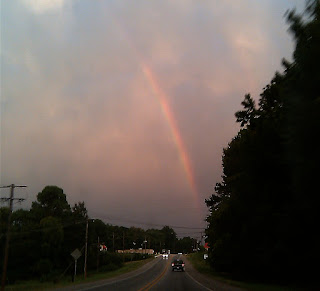 It's our first week here in Arkadelphia and we're off to a great start. Arriving as clouds parted and a rainbow appeared directly above downtown, we felt welcomed from the moment we crossed the Caddo River on our way into town.
Below are introductions to the three main members of our mural team. 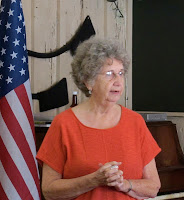 Long-time resident of Arkadelphia, Farrell Ford is the Executive Director of the Clark County Arts and Humanities Council and President of the Caddo River Art Guild.  Before her 'retirement' (clearly she's anything but retired) she spent many years teaching art and as a counselor in Arkadelphia's public schools. Farrell is a benevolent task master with a heart of gold and we are grateful for her leadership. 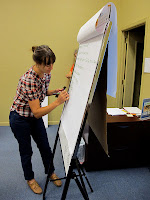 Ashley is a professional muralist who's latest mural titled "Reanimating the Arts in Topeka" is on the Great Mural Wall of Topeka. She is the recipient of the 2012  Arts Advocate Award from the Topeka YWCA Center for Safety and Empowerment and recently showed one of her drawings in New York City at the soho20 Gallery for the exhibition "Backlash."  She received her BFA from Washburn University in 2011. You can see more of her work at http://ashleyjanelaird.wordpress.com/ 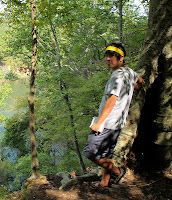