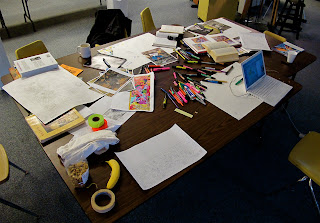 Crossroads, cross currents, immigration, language translation - German - Spanish - English, Mennonite history, Hispanic heritage, the railroad, the Harvey Restaurant, agriculture and especially Red Turkey Wheat, monuments, Bethel College, Newton / North Newton tensions, Sand Creek, Native American settlement, the Doppler effect, military service, pacifism, farmers market, youth disenfranchisement and youth voices, the spread of Wichita, the mural process especially our design team meetings, Combs Organ Specialists. These are some of the topics on our narrowed down list of subjects for the mural design. Enough for at least five murals, a PHD dissertation and a reality tv show, but not a clear narrative or visual idea that could contain them all. 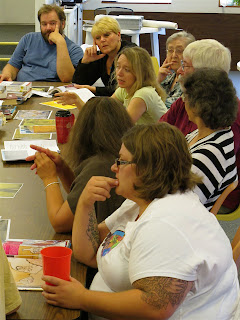 To help capture, in our design, this wide range of seemingly unrelated material , we began searching for common metaphors that would at once be visually compelling and imbued with useful meanings. So, there we were around the table scratching our heads and scribbling on pages. And there we were looking sort of like a group of quilters stitching individual designs into a whole, or model railroad enthusiasts imagining in miniature their ideal town, or even kids playing a board game about the machinations of city life complete with tiny symbolic figurines and buildings. And finally, there we were upstairs at the Carriage Factory Gallery discussing, disagreeing, dreaming, listening, and compromising because we wanted to to make the best mural possible. Aha. 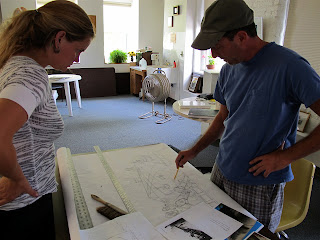 Our design would be centered around a table with people engaged in the process of imagining, remembering, and creating their community. We included references to quilters, model railroads, and board games, while the space behind the seated figures was occupied by their overlapping hopes, half-baked notions, and embellished memories.

All of this rendered with symbols specific to Newton, North Newton, and our design process. The color study, made as a collage with cut paper, emphasized the difference between the more literal realm of the figures working around the table with that of the dream space behind them. Add an architectural border with textile designs and voila we had a pretty rockin' mural design. Whew. 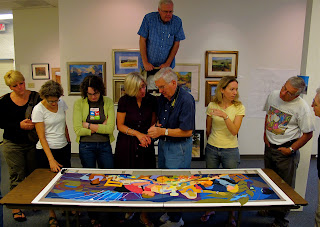 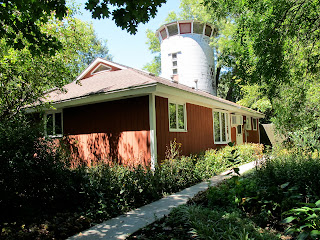 For the course of the mural project, Erika, Matt and I are staying at a b&b tucked away on a little gravel road in North Newton. Part of an old farmstead, the house is attached to a grain silo that is now used as a super cool living space by the home's owner and our host Vada Snider. It's a beautiful spot surrounded with lush, well tended gardens, decorated on the inside with many of Vada's charming black and white photographs, and is a welcome retreat from our days spent on scissor lifts in the middle of the Dollar General parking lot. 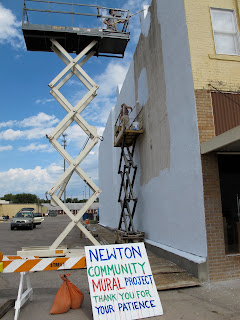 Erika and Matt battle in the wall priming competition
Now that we're hot on the trail of a mural design, we've been following leads from passersby, professors, and Drubers Donuts patrons to name a few. The suggestions (I'll talk about local cuisine in an upcoming post) have led us to the Harvey County Historical Museum, Bethel College, the Kauffman Museum, the public library, the Mennonite Heritage Museum in Goessel, and the hike / bike trail along Sand Creek where I swear I saw (after Erika pointed it out) the world's largest frog. 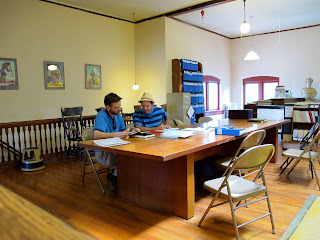 Matt and Dave at the Harvey County Historical Museum
We even made a special trip to see, and learn from, the remarkable fresco by Jean Charlot (one of the 20th century's most distinguished muralists and a peer of Diego Rivera) in the Abbey Church at Benedictine College in Atchison. 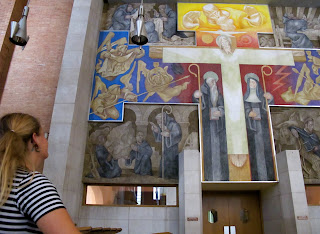 Erika admiring Jean Charlot's fresco
And we have been searching for signs of how Newton characterizes itself. There is always the Chamber of Commerce and tourist information office to get the town motto and accompanying glossy brochures. This old Newton postcard shows the Interurban crossing the Main Street bridge over Sand Creek. 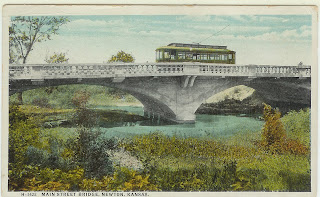 Since we are in the process of creating a giant public artwork, we also explored how Newton celebrates and remembers as seen in the public monuments it has chosen to build. But using monuments to gauge a community's character has a fundamental problem - their cost limits who can afford to build them. And therefore it's no surprise that those of lesser means are often underrepresented or not represented at all in public art, memorials, named civic institutions and the like. With this understanding we went hunting for Newton’s mega symbolic signifiers.
Cumulus but non-threatening clouds amidst a blue sky are everywhere in Newton. Created or inspired by the artist Phil Epp, all of Newton's public signage is decorated with his characteristic skyscapes. So are the newest town water tower and a couple of impressive tile mosaic murals. 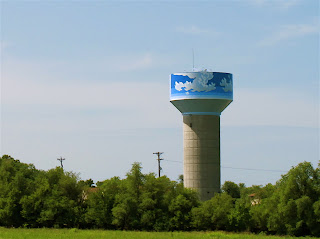 Water tower cloudscape inspired by Phil Epp
Adjacent to the public library there are the requisite cannon and steam engine locomotive. Downtown there are a few murals, the most striking, painted soon after 9-11, is of a saluting soldier in fatigues in front of a building size American flag. Another beautiful mural by Ray and Patrice Olais, that once adorned a local softball field, remembers Hispanic immigrant railroad workers and the softball league they started when told they could not play in the city (white) league.
And then there is the curious statue in Athletic Park. I had a feeling it was something special when we first came upon it. A fifteen foot tall figure carved out of stone stands solemnly atop a salmon colored concrete base. 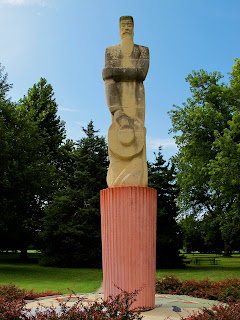 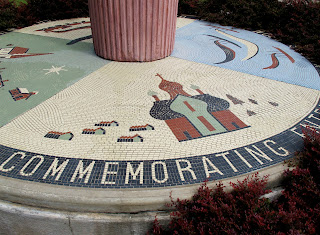 Surrounding the base, in ceramic mosaic, is a series of four panels that illustrate Kansas Mennonite's emigration from Russia. "The Mennonite Settler" as it is known was created by the artist Max Nixon in 1942 to celebrate Mennonite farmers who brought the famed Turkey Red Wheat to Kansas in the 1870's.
The project was funded in part by the WPA with help from Newton's Junior Chamber and, get this, farmers near and far who sold wheat at market and then donated the proceeds to the creation of the sculpture. A monument to wheat built, in part, by wheat grown in nearby fields. Wow, I can already see how this story alone would make a great mural. Maybe someday...
Posted by Dave at 7:57 PM No comments: 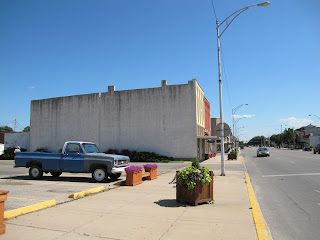 How do you decide what to include in the mural?

This is one of the most common questions (and one of the toughest to answer) I get when beginning a new project. The flip-side question, how do you decide what to leave out? is easier to answer because, put bluntly, the answer is that most things are left out.
At one of our first community meetings, with hundreds of possible ideas on the table and no clear way to make them all fit together, I reminded participants that this was only one mural. If we wanted to create a visually compelling and meaningful artwork and not just a simple enumeration of things, the bulk of historical facts and faces, dates and places would need to be left on the cutting-room floor. Collaboration implies compromise. 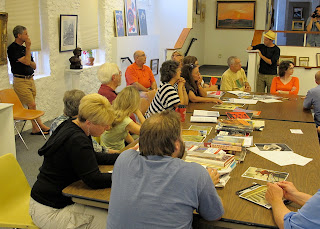 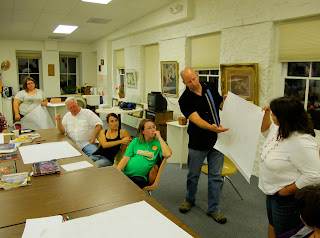 Working to evoke the history, culture, and people of a place with any sort of objective truth in a public art work is a daunting task. As you begin to do research, it becomes clear that perceptions of history, culture, and development are rarely static or monolithic. Every place and every community of people has many overlapping notions about their history and community, many of which are in flux as economic, political, and demographic circumstances change. 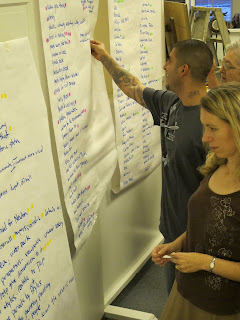 Our design team meetings have reflected this complicated understanding of the past, as if history were constructed of hundreds of photos of the same scene from hundreds of individual points of view. Like a cubist painting by Picasso where fruits, faces, chairs and tables are depicted simultaneously from straight-on, profile, above and below in the same image, or a popular song that is interpreted first by an opera singer, next by a rock -n- roller, and finally by a bluegrass troubadour, meanings change depending on the singer, painter, or teller of a story. 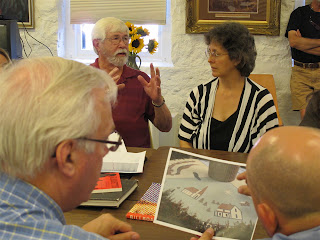 Listening to such a wide range of points of view about essentially the same set of facts, we began to realize that the overlapping of history and complex multifaceted understanding of Newton’s identity, discussed in our community meetings, corresponded to the dynamic nature of a place at a nexus or crossroads. And because Newton is and always has been a place of crossroads, cross-currents, and cross-pollination, we felt like we had found a potential theme for the mural.
Newton's identity is grounded in its location as a geographic, economic, and cultural intersection. Early in its history, during the cattle drives of the 19th century, Newton was where the Chisholm Trail and the Atchison, Topeka, and Santa Fe railway crossed. Later it became the intersection of two of the most important auto routes in North America: the Meridian Highway (U.S. Route 81) which runs south from Winnipeg, Manitoba Canada through Newton to Mexico City, Mexico and on into Central America; and U.S. Route 50, better known as Main Street USA, which begins in Washington, D.C. goes right through Newton and ends in Sacramento, California. And throughout its history, Newton has been a locus of cultural and ethnic integration welcoming immigrants from around the world, especially Mennonites from Russia and Hispanics mainly from Mexico. 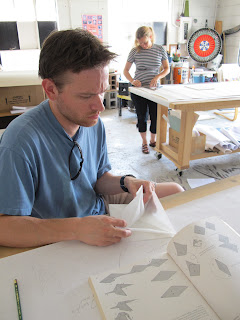 Our challenge has been to find a way to elaborate on the raw information of these crossings, framing them within visual metaphors that can hopefully get at the spirit or essence of the Newton /North Newton community.
Posted by Dave at 7:55 PM No comments: