How do you sum up a community in a mural?
Is it more than a sum of history and well-known personalities? Is there more than one dream that speaks to its residents? How does an artist translate a city, a town, a neighborhood into a two-dimensional image? Kansas artist and muralist David Loewenstein suggests writers face the same challenge and solve it the same way: poetry. Visual poetry, that is. “I like to think of it as a visual poem that refers to the dialogue with the people we’ve worked with. It’s more symbolic than a literal timeline. . . Ours is more geared toward a feeling, a resonance, a process,” he said. Loewenstein, assistant artist Ashley Laird and Texas apprentice Catherine Hart hope to turn local comments, suggestions and discussion into a Waco poem on the southwest side of the East Waco Library.

Mural Project
The three are in Waco for the next two months as part of a six-state Community Mural Project underwritten by the regional arts agency, the Mid-America Arts Alliance. Waco joins Tonkawa, Okla., Arkadelphia, Ark., Joplin, Mo., and Newton, Kan. Organizers are presently evaluating proposals for a mural in Nebraska to complete the project. Loewenstein is a Kansas artist with a strong background in murals, although they’re far from his only art as he’s also a printmaker and writer. He’s joined by Laird, another Kansas muralist, as his assistant. Austin artist Hart rounds out the team as a mural-painting apprentice. Hart got bit by the mural bug after painting on one. “I realized going really large was invigorating,” she said.

Community ideas
Three community meetings at the East Waco Library this month have provided the artists with ideas, though the muralist notes that it sometimes takes awhile for people to get beyond wanting to honor specific individuals and historic events. The muralists are trying to nudge contributors beyond the usual suspects of the Waco Suspension Bridge, longhorn cattle and the Chisholm Trail. “That’s OK, but there’s not as much poetry in that,” he said. Experience with other community murals tells the artists they’ll have plenty of ideas to pick and blend together. “We can’t fit in most suggestions we get. There are too many and folks want everything in,” he said. “It’s hard to edit down.”

Community murals often have a different language and style than commercial ones because their purpose and process are different. Most large outdoor art, seen on billboards and walls, is meant to sell products or candidates, he noted. In addition, the public usually sees visual art as an individual creation and not collaborative as, say, theater or dance, he said. It’s the project’s discussion phase in the community that can build something more than art, namely civic conversation and communication. In Arkadelphia, mural meetings brought out a discussion of the city’s past racial discrimination. Joplin, devastated by a tornado just before its mural project began, saw a small controversy over how dominant the tornado and its impact would be in the mural design — if included at all.

Part of the process involves showing what’s possible in a mural. Oversized, simplified images often work better than small, detailed ones and bright colors do much to attract the eye, although the Kansas muralist adds part of that is his own artistic sensibility. “We look at other murals because you need that vocabulary to do what you want it to do. You have to understand what’s been done and what’s possible,” he said. A look at Loewenstein’s own mural designs reveal small touches that increase viewer impact: subtle geometric forms and lines that direct the viewer’s eye, imply motion and unify elements. Balancing what’s in a story and how to tell it is Loewenstein’s artistic sweet spot: “I’m smack in the middle between story and technique,” he said.

After the community meetings, the artists draft a design team from those willing to work on the mural’s look and painting. That team’s input helps shape the design that Loewenstein and his associates craft, then fine tune. Once the design is approved by the team and the city, its outline will be projected and painted on the library wall. The community will pitch in to paint the first weekend, with as many as one hundred people getting involved, Laird said. After that, the artistic team will take over, handling any detail work and final touch-ups. The Waco mural should be finished by mid-June. Given the special exterior paint used, its images should last more than a decade before any touch-ups are needed.

It won’t be just art left behind but friendships and relationships when the muralists move on after the project’s completion, said Loewenstein, who said sometimes it’s hard to say goodbye to a community that has pulled together to create art. “It’s heartbreaking to leave places that are alive with wonderful people,” he said.
Posted by Dave at 11:46 AM No comments:

In East Waco, I am joined by an experienced and talented crew. 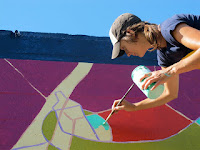 Mural Assistant Ashley Laird
Ashley is a muralist and studio artist based in Lawrence, Kansas. She is a veteran of the Mid-America Mural Project having assisted on both the Joplin and Arkadelphia murals. After graduating from Washburn University with a BFA in 2011, Laird has worked on numerous public projects including the Mid-America Mural Project, the 2nd Annual Welling Court Mural Project in Queens, NY, and just returned from Songdo, South Korea where she assisted with a collaborative mural in the city's Central Park titled "Songdo: A City on the Rise." In Topeka, Ashley was lead artist for the latest mural on the Great Mural Wall titled “Reanimating the Arts in Topeka.” Laird’s latest studio work culminated in a solo exhibition, “Turning Back The C(l)ock,” at the Bourgeois Pig in Lawrence, KS, one of the drawings of which was showcased in the exhibition, Backlash! at the Soho20 Gallery in New York City. In March of 2013, Laird spoke about these drawing at the Southern Graphics Conference in Milwaukee. In 2012, Ashley led women and children in a collaborative painting project for Survivor Art Night at the Topeka YWCA Center for Safety and Empowerment for which she was honored with the 2012 Arts Advocate Award. Ashley is one of the founders of Chords and Oil art collective in Topeka, KS, a springboard organization for many unique projects from 2009-2010 including a major installation at the city’s public transit hub. Her future projects include mural commissions in South Dakota and Nebraska. Ashley's blog is http://ashleyjanelaird.wordpress.com/ 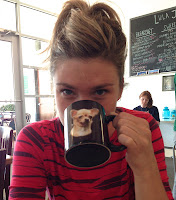 Catherine has been a maker for as long as she can remember. After years of playing with markers, paper, and clay, she took her first art classes at the age of ten. She began attending an art camp during her summers where she discovered her love of blowing glass. In high school she continued to paint, draw, and blow glass by commuting to a studio in Brooklyn, NY from her hometown of Montclair, NJ. She received her BA from California College of the Arts in 2004. Hart then moved to Austin, TX in 2005 where she ran the local art supply store Jerry's Artarama, expanding her knowledge of all art making materials.  She was the 2011 Artist in Residence at the East Side Glass Studio in Austin,
where she completed her first mural & found a new excitement for large scale work.
You can see more of Catherine's work at https://catherine-hart.squarespace.com/

Project Coordinator
Doreen Ravenscroft
Originally from near Chester, England Doreen graduated with an S2 degree in Chemistry from Carlett Park Technical College in Eastham, England in 1962 and was employed thereafter by Unilever in England. In 1976 she moved to the United States with husband William (Bill) Ravenscroft. In 1979 they moved to Waco. Doreen has served on the boards of: Art Center Waco, Waco Women's Symphony Guild, Historic Waco Fort House, Waco Independent School District Foundation, AJ Moore Advisory Board and Community Race Relations Coalition committees. In 1997- 2003 she co-chaired the Open Door Arts Fest, a visual and performing arts festival. She has received many awards including: the 2001 American Fundraising Professionals Volunteer Award of the Year, the 2006 Zambelli Internationale Volunteer of the Year award by the International Festival and Events Association, the 2007 Make a Difference award for the arts in Waco and the Waco Foundation 2011 Ruth and Lawrence McMillan award recognizing visual public art. In 2004 Doreen founded the non-profit organization Waco Cultural Arts Fest, dba Cultural Arts of Waco of which she continues as the president and producer.
Posted by Dave at 8:01 PM No comments:

Getting oriented in East Waco

The Brazos River divides East Waco from downtown as long as you don't consult a compass. That's because East Waco is really north of downtown and maybe sort of a little bit east.  To know your way around Waco, you have to spend time here - no map or GPS will do. 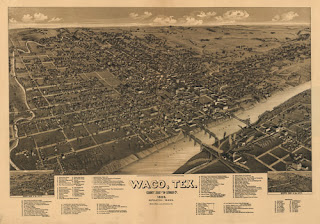 We're staying just a few steps away from the river in an area that used to be the heart of the African - American business district (and before that home to the Waco tribe), but was razed in the late 60's as part of an urban renewal effort. And you can tell there's something missing. The empty lots that lead up to the river beg the question, what was here?

Crossing over the elegant pedestrian suspension bridge that connects downtown to the eastside feels like going back in time. From the upscale Hilton and Indigo hotels over to the Empire Seed Co. selling bedding plants and flower bulbs along the remnants of Bridge Street. Elm Avenue known to everyone as Elm Street begins at the east end of the bridge where one of the old bridge supports is painted with a mural about the life of Martin Luther King Jr. 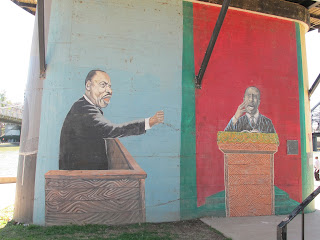 This felt like a good sign and there are other murals that dot the streetscape along Elm, although many of the buildings appear vacant and need of serious restoration. A few like Lula Jane's signal a possible future - a different kind of renewal that draws in students from Baylor University for tasty baked goods and lattes.


The site for our mural is the east branch of the Waco Public Library in a a building that used to be an HEB grocery store. That transition from grocery store to library is compelling and has got me thinking - from food for the body to food for the mind. Ironically, now there is no grocery store in East Waco making a large part of the area an urban food desert. Another story of transition in the neighborhood is underway just across Elm from the library where the Paul Quinn campus, home to an Historic Black College that moved to Dallas in 1990, has become a successful charter school called Rapoport Academy.

Named for Audre and Bernard Rapoport and founded by educator Nancy Grayson (who has turned her attention to baking at her latest endeavor Lula Jane's), this expanding new school is helping to reinvigorate the neighborhood.

Ashley, Catherine and I have just begun to explore and meet with neighbors. But judging from our first week, we expect a dynamic series of design team sessions in the coming weeks. 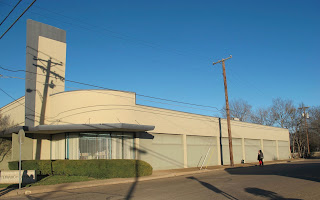