from the Newton Kansan
July 22, 2010
Community Mural in the Works 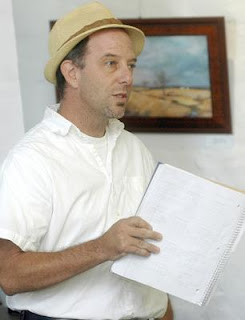 Dave Loewenstein, a nationally recognized mural artist, talks to a group of more than 40 community members Monday night at the Carriage Factory Gallery in Newton regarding the community mural project. He will be in Newton for two months, working on aspects of the mural, from community meetings to design planning. The community mural will be on the north-facing wall of the Combs Organ Building south of the railroad crossing on Main Street. In early August, the community is invited to paint or watch the mural come to life. 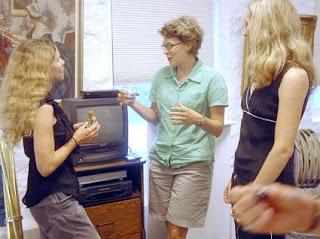 Among those attending a Monday night event at the Carriage Factory Gallery in Newton who listened to Loewenstein are from left, Danika Bielek, Sara Dick and Rachel Epp Buller, professor of art at Bethel College. Those interested in the design committee for the community mural project met Wednesday night. 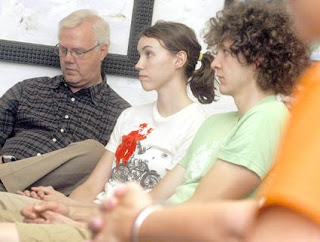 Audience members, from left, Pat Washburn, Emily Piper and Sam Piper, listen during the community mural meeting Monday night. Newton/North Newton was awarded the only mural grant project in Kansas. The Kansas Community Mural Project is funded by a grant from Mid-America Arts Alliance, the National Endowment for the Arts and the Recovery Act.
Posted by Dave at 7:52 PM No comments: 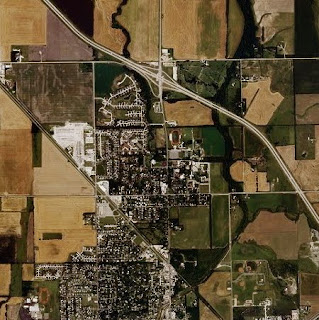 Newton was chosen as the Kansas site for the Mid-America Arts Alliance Mural Project in large part because two groups, one from Newton and the other from Bethel College in North Newton, made proposals independent of each other that emphasized different but overlapping aspects of their larger community. When the two groups discovered that they had both made proposals, they got together to share their ideas and create a new proposal that combined their efforts, thus beginning the very kind of collaboration that the MAAA Mural Project was intended to encourage.

Here in Newton, I'm joined by two esteemed assistants: Matt Farley, from Lawrence, a public artist who once tried out for the Boston Red Sox and who's installation "Frozen Assets" was recently chosen as one of the forty best public artworks in the U.S. and Canada by the non-profit, Americans for the Arts; and Erika Nelson, from Lucas, a multifaceted art maker and catsup expert who is best known for her traveling side show extravaganza " The World's Largest Collection of the World's Smallest Versions of the World's Largest Things".

And, thanks to the generosity of building owner Mike Combs, the Newton mural will be painted in a prime location - the north facing wall of Combs Organ Specialists. 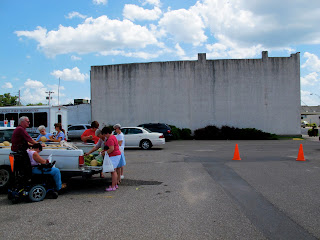 The wall located along Main Street and adjacent to the Salvation Army Thrift Store is also the backdrop to Newton's twice-a-week farmers market, and is clearly visible from the Newton train depot where Amtrak's Southwest Chief makes east and westbound stops. We couldn't have asked for a better setting for our project.
Posted by Dave at 7:54 PM No comments: