People have begun to notice the mural taking shape over on East Side Boulevard. Community painting days brought nearly 250 volunteers out to begin filling in our block-long canvas. Drivers slow down and stop to try to make out the images. Merchants and shoppers on Second Street ask us how it's going and give their two cents about the design. The media has taken notice too. Articles and reports in local papers and tv news programs have highlighted the project focusing mainly on the buoyant mood surrounding the collaborative painting. Less expected was the wonderfully positive editorial that ran in the Hastings Tribune last week.

It seems the editorial has sparked a dialogue about the importance of the mural and whether the city should focus its efforts elsewhere. In the days following two letters to the editor appeared. Here is the first.


And then just a couple days later, this appeared as a rebuttal.

A debate about the importance of community-based art in the local newspaper. An honest discussion among residents about the relative value of art versus other amenities in their community. Who would have seen this coming? Whichever side you're on, this is good news. When we start talking to each other (even if it begins in the letters column of the paper) about art and its role in our lives we are making progress. Thanks to the Tribune and the letter writers for beginning the discussion.
Posted by Dave at 7:18 PM No comments:

We are well into painting our mural in Hastings. In fact the dedication will be this Sunday, October 13th at 4pm. Stop by if you're in the area.

For the sixth and final mural of the (first round) of the Mid -America Mural Project, we decided to pull the curtain back on our process and reveal some of what goes on behind the scenes.  Call it a mural within a mural or a meta-mural, it was a way for us to honor and recognize the many people who participate and to give a glimpse into the design process.

In the Hastings design we follow the process from wall prep to research to design to transfer and finally community painting. Along the way, many of those who have helped us appear. Below is a description of the design from left to right. It is illustrated with the line drawing we used to project the design onto the wall.

The mural begins with two volunteers preparing the wall. One is priming, the other measuring. A shadow of bike rider on the bike path is cast onto the wall from behind them. To their right, giant figures wade into a pile of possibilities comprising Hastings culture and history, that, when sorted out and edited down, will become elements of the mural. The things that these design team members touch / select go from monochrome to full-color indicating their preference.

Under the encouraging watch of a mustachioed local celebrity (actually the main figure of a mural in the Kensington) the mural team delves into the history and culture of Hastings sharing their discoveries with each other at the Hastings Museum. On their research table, a collection of seemingly unrelated items interact, including the statue of a Pawnee man, a polar bear, Kool-Aid stand, rattlesnake, Prairie Loft Barn, and Sandhill cranes.

Switching over to a scene in front of the yet to be painted wall, young mural designers begin by making drawings on the sidewalk. Two of them invoke fantasies of flight and hopes guided by dandelion seeds,  while another contemplates the cycle of water from rain to farm to aquifer.

The design for this mural in a mural begins to take shape symbolized by a Hastings brick layer putting the first pieces together. He is joined by design team members who, holding up the unfurling image, share their creation with us.Their creation includes a stylized version of Fisher Fountain surrounded by symbols of local agriculture and architecture. Fireworks light up the sky as the mural design is projected onto the wall.

Before the illuminated wall, neighbors join the fun playing with shadow puppets in front of a design proposal by Dave Stewart. The final section of the mural, we see Hastings' folks young and old participating in community painting weekend. Cast across the figures of the painters and onto the wall in front of them, the shadow of an old steam locomotive passes silently into history.

Check out this article about the Hastings Community Mural Project.

Getting to know Hastings

Like many towns on the Plains, Hastings traces its development (after the Pawnee were forced to move to Oklahoma) to the railroad. But unlike some towns who's rails haven't been used in decades and depots that haven’t seen a traveler since soldiers returned from WWII, trains both freight and passenger continue to stop here regularly. It’s a crossroads - of train lines, of trails, of flyways for migrant birds, and of paths for migrant workers following the rhythms of planting and harvest. 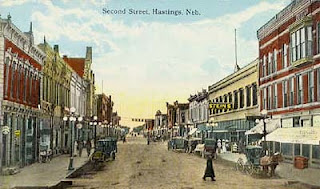 Corn is king of the economy and ingrained into the culture. We tend to think of it as fuel for livestock and automobiles and a symbol of the Nebraska football team, but corn is a staple and a revered symbol for the Pawnee as well. Just the other day outside of Kearney, we saw a small stand of Pawnee Eagle Corn, once thought to be lost and extinct, restored and growing vigorously after a few protected seeds were found by the tribe in Oklahoma.

Today, Hastings is in the midst of a modest revival. After years of struggling with a changing economy, development plans that took businesses out of downtown and slow population growth, residents and city leaders are looking back to the heart of their community for inspiration. A city that was beset with ground water pollution problems in the 1980’s, Hastings was named “America’s Greenest City” in 2007 by Yahoo! The progress that has resulted, which as one of our design team members reminded us is not the same as growth, has come largely from creative reuse and reimagining of what was already here - including former residents who have begun to move back after realizing what they missed.

One example is on the grounds of the old State Hospital, known as the Regional Center, where Prairie Loft is reintroducing visitors to agriculture appreciation, outdoor education, cultural traditions, and the wise use of natural resources. Also, the area that once comprised the massive Navy Ammunition Depot just east of downtown has been repurposed as many things including Central Community College and the Good Samaritan Retirement Village. And many of downtown’s buildings are being restored to new uses including The Lark, an art and performance space that is scheduled to open in December.

But the best story of reinvention I’ve heard here comes from one of our own design team members, Dave Stewart. He is a living example of creative reimagining of one's own life and vocation. A custodian for the Hastings College art department Dave, at age forty-nine, was inspired to take an art class and then another and another. That was twenty-five years ago. Today, Dave, who I'll write more about later, is one of the region's most important and highly esteemed working artists.

A big question for the design team is - What else can be reimagined? What cultural traditions and forgotten histories can be restored? Who's voices need to be amplified? And how? Our design team was quick to realize that the mural itself will be a reimagining of the wall and the creative reuse of a place that was once a rail line and is now the Pioneer Spirit bikeway.

The process of designing and creating the mural are tangible examples of the too often forgotten role citizens play in shaping the place they live. We together through this process are reclaiming how the community including its history, current challenges and future aspirations is portrayed and understood. What was for years the unadorned back side of a strip mall, will soon be a collective vision of Hastings ongoing renaissance.

And this may be the most important part of what we have been doing in Tonkawa, Newton, Joplin, Arkadelphia, Waco and now Hastings - modeling a process of community engagement that takes the form of a collaborative public mural. If we do it right, our artwork will be evidence of our commitment to each other, our conversations, research and new perspectives. Hopefully it will endure as a touchstone, reminding viewers of what is possible when we come together in a spirit of respect and affection to first think and then act on our shared interests.