The art of Sammy Landers


There is one more story (and one more mural) to share about our project in Arkadelphia. Early during our visit there, while we were still trying to untangle the mysteries of what kudzu covered beasts lurked behind our temporary home, and the many shaded meanings embodied in the common phrase ‘bless your heart,’ we were introduced to the remarkable artwork of Sammy Landers.  Jane Lucas, Executive Director of Group Living Inc., took us on a tour of Landers' work displayed downtown, including a quick stop to meet the artist himself and a peek at an archive of his drawings from the last twenty years. 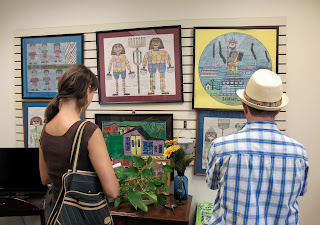 Sammy, who has autism, has been a client at Group Living and the Arkadelphia Human Development Center for most of his life. He doesn't like to talk much so Mariela Crockett, who works with Sammy, was kind enough to share some of his background. She said that Sammy came to Arkadelphia as a teenager from his home in Hughes, Arkansas. While he still had family there, Sammy would make periodic visits home, returning with incredible drawings that people started to take notice of.

In the early 1980’s, when he came to live in Arkadelphia permanently, the output of his drawings grew greatly while the subjects he chose to depict evolved. Responding to his passion for drawing, folks at Group Living made a studio space for Sammy above their Bee Hive thrift store. Mariela said that his early work was influenced by food can labels, jigsaw puzzles and magazines donated to the thrift store, and that it developed over time to reflect the people and places in his life.

Landers’ best-known works are instantly recognizable, boldly stylized, and beautifully colored drawings that defy easy categorization. Often depicting pairs of fantastic figures with symmetrical features and elaborate outfits, they look at once like cousins to Transformers and iconic figures from an unknown ancient culture. After a 1997 tornado partially destroyed the apartment he was living in, the figures pretty much disappeared and he became focused on highly detailed renderings of buildings.

Made on common sketch-pad paper, his drawings are tightly rendered using drafting tools, colored with carefully applied layers of crayon and then scrapped through to create deep and luminous textures. Viewing dozens of Sammy’s drawings laid out next to each other in the Group Living offices, I started to see the many characters as the cast of a grand costume drama, maybe a fable, where a young boy and girl encounter a series of trials along an epic journey. 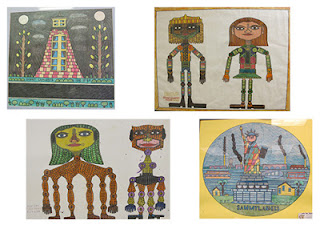 I was inspired by Sammy’s work and I wondered how we might shine a light on it for the broader community to enjoy. During our stay, I talked with Jane and Mariela about how to do this. Sammy had had exhibitions and many people owned his drawings, but there were many more who were unaware of his art. What if we were to reproduce one of his drawings as a small mural outside of his studio on Main Street, I asked. Would he like that? Yes! he would be thrilled, they said.

It was difficult to decide which drawing to recreate. There were hundreds of options, including his characteristic figures, buildings, and even a few landscapes with ‘okra trees’ as they’ve come to be known. In the end, we chose a drawing hanging in the Group Living offices that showed a family of four figures as opposed to his usual pairs, including one with an umbrella that people have come to refer to as Sammy’s Mary Poppins. This drawing also had an uncharacteristically well-developed background made from an interlaced pattern of colored shapes – perfect for a mural. 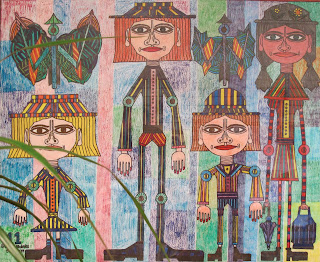 As the outline of the mural started to go up, we asked Sammy to come out and have a look. He recognized it immediately as his work and said emphatically “ Keep it there.”  That sounded like a pretty clear approval so we went into overdrive to finish it in the day and a half we had left in town. 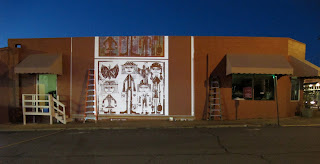 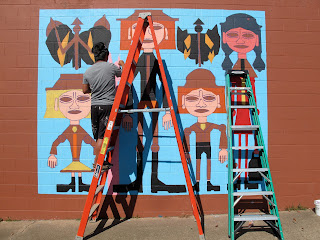 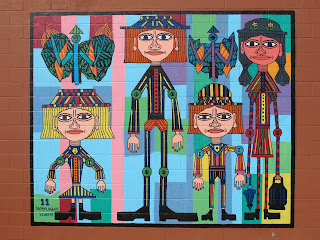 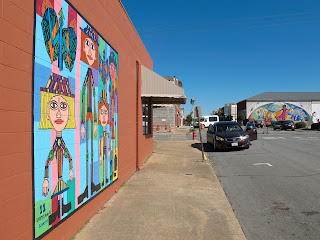 Long story short, Arkadelphia has two new murals, one a community-wide project and the other, just down the street, in appreciation of the great Sammy Landers. 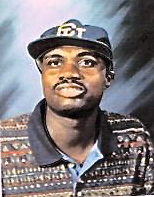