(In Waco, Texas, artist Chesley Smith (an assistant on our 2013 project there) works on a new 300' foot mural downtown.)

from the Waco Tribune
May 25, 2019
Scenes From South Waco

Waco history goes on as thick as the paint on the southwest wall of Diversified Product Development, 1001 Webster Ave., and that’s the point.The white wall facing South 11th Street is being turned into a 300-foot mural packed with images from the history of South Waco. 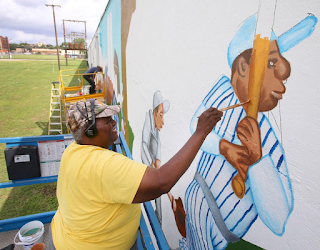 There is baseball icon Babe Ruth, batting at Katy Park as a boy watches through a fence; horse racing at Gurley Park; bales of the cotton that fueled Waco’s economy; a farmer selling watermelons; a jet from the James Connally Air Force Base, whose servicemen populated downtown on weekend leave; the Cotton Palace; a locomotive engine; the Waco Suspension Bridge; A.J. Moore High School; a Greyhound Lines bus; a Mrs. Baird’s bakery; silos; Dr Pepper; Pure Milk Co; and, from the side where it did the most damage, the 1953 Waco tornado and the city blocks it shattered in its path.
What is billed as the longest mural in Waco is taking color and form this month, four years after Melissa Skrhak suggested the idea to her father, Ray Fritel, owner of Diversified, a baseball’s throw away from where the mural’s Katy Park once stood.

Lead artists Chesley Smith, 74, and Ira Watkins, 78, estimate there is a month or so of painting ahead before the wall is finished, depending on the number of volunteers who show up to help out.
Central Texas Artist Collective’s Steve and Angie Veracruz are coordinating painting sessions through the group’s Facebook page, with sessions starting at 7:30 a.m. and 7:30 p.m. May heat is a consideration for the split shifts, and so is an afternoon sun that makes a white wall blinding to painters.

Fritel said the project started when he was planning to repaint the wall, and Melissa suggested a mural on part of the wall would be a fun idea. With Cultural Arts of Waco President Doreen Ravenscroft, Melissa talked with Kansas muralist Dave Loewenstein, who led a mural project for the East Waco Library in 2013. Early discussions imagined the Diversified mural as a similar way to highlight South Waco history. When initial costs seemed too high, Ravenscroft suggested using Waco artists Smith and the San Francisco-based Watkins, who ended up designing the mural.
Over time, the project grew to cover the entire wall.

“You know how it is with Doreen,” Fritel said. “Things don’t get smaller. They only get bigger, and that’s certainly a compliment. We went along with Doreen and the artists when they said ‘Let’s do the whole wall.’” For Fritel, it’s a thank you of sorts for the city he and his family moved to in the 1980s.
“My wife and I feel it’s good to give something back to the community,” he said.
Fritel and his company handled the wall cleaning and preparation — no small task, Ravenscroft said — and funding arrived in grants from Creative Waco and the Texas Commission on the Arts.

The two artists bring a considerable amount of Waco history themselves as well as several murals around town. Smith continues as a professional artist after retiring from a career teaching art at Paul Quinn College, Waco Independent School District and, for a brief while, the school at the Texas State Prison for Women in Gatesville. He has had work exhibited across the state and has sold paintings to buyers in Canada and Europe. He has a one-man show planned for July at the Carleen Bright Arboretum in Woodway.

“I stayed with it,” Smith said. “It’s challenging and one of those things that doesn’t give you an immediate payback, but I’m still standing.”

Smith limits his mural commissions to no more than two a year because of the time and work involved. In 2005, he completed three “Color Us Proud” murals seen on Elm Street. His “Black Pride” is on a side of Marilyn’s Gift Gallery, with “Each One Reach One Teach One” and “Peace” nearby.
Seeing his work in public still perks him up.

“It’s exciting to drive by and see your art and know it’s going to be there for a while,” he said.
While art education shapes much of Smith’s work and career, Watkins largely was self-taught, studying and imitating an acquaintance’s chalk drawings as a boy, then proceeding to line drawing from newspaper comics. One of 12 siblings growing up in Waco, he ran away from home as a teen, staying with a sister in Dallas, then moving later to San Francisco, where his folk style found buyers. For a decade, he worked for the state encouraging disabled children and adults to try art.
“You’ve got to have the confidence that someone who likes it will see it someday,” Watkins said. “Art is art.”

Even with decades of painting experience, he still relies on trial and error to get it right.
“When it flows, it’s all right. When it doesn’t, I wrassle with it, wrassle with it, wrassle with it,” he said. Like Smith, Watkins has several murals in Waco. He painted fishing and eating scenes on the exterior of the former Easy Fisherman Restaurant on Taylor Street and did the painting of Martin Luther King Jr. in Martin Luther King Jr. Park on a concrete pier that once supported an interurban rail line. He drew on pictures from “The History of Waco” for some of the images in the mural. Others came from his boyhood experience.

“I sold watermelons off the back of a wagon for Mr. Gus, Gus Brinkley,” he said. “I picked cotton when I was young. To me, it was an adventure.” Watkins also climbed the cables of the Waco Suspension Bridge with a friend on a dare and shined shoes of Connally Air Force Base servicemen at the Greyhound bus station downtown. The mural is divided into panels, with outlines marked for some and others still blank. Watkins and Smith are doing much of the detail work so far, with volunteers employed to fill in areas of solid color. It’s filling in, but it’s work to fill in a neighborhood’s history.