Working Together Toward a People's Art
October  2013

With guidance and generous assistance from over three-hundred Hastings residents, especially Dave Stewart.

It is exciting to announce that a beautiful new book of Dave Stewart's cartoons from the Hastings Community Mural Project is now available. 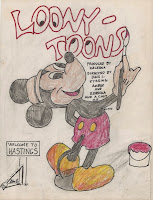 The 40 page book includes all of Dave's hilarious drawings that poke fun at the artists, the mural process and other Hastings' characters. The book also reproduces Dave's heartwarming speech at the mural dedication and a short essay by lead artist Dave Loewenstein. Click on the image below to preview the book and order copies. 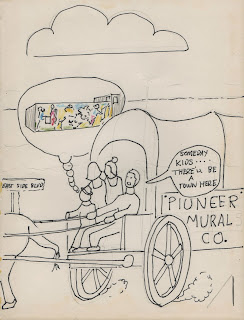 from the Grand Island Independent
October 14, 2013

HASTINGS — More than 100 people celebrated Sunday afternoon as a new mural, “Working Together Toward a People’s Art,” was dedicated in Hastings. The more than 200-feet-long, 12-feet high, vibrantly-colored painting graces the east side of the Depot Plaza building owned by Greg Spady. It faces Eastside Boulevard and runs parallel to the Hastings hike and bike trail making, it accessible to numerous populations.

“This is our mural,” said Kaleena Fong, the executive director of the Hastings Convention and Visitors Bureau and president of the Hastings Arts Council. “It was created by us and for us.” Fong wrote and submitted a $50,000 grant application to the Mid-America Arts Alliance, which selected Hastings as the sixth and final community for its Community Mural Project serving Arkansas, Kansas, Missouri, Nebraska, Oklahoma and Texas.

Lead artist Dave Loewenstein of Lawrence, Kan., said the mural’s location is superior for reaching into neighborhoods, a commercial corridor and the hike and bike trail. It’s another example of the “creative reinvention” that is alive and well in Hastings through the reuse of downtown buildings, the restored preservation of the Prairie Loft and now the story-telling splashes of color that are the new mural, he said. It is community art available to all walks of life to behold and enjoy.

The mural depicts the collaborative work of a mural being created, Loewenstein said. It shows ideas being tossed about, sketches being made, community icons illustrated and the community’s past and future being celebrated. Hastings friends and neighbors are depicted in the mural. One such depiction is of local artisan Dave Stewart, who asked the dedication audience Sunday if they wanted to sell the mural. He had been wondering what it might be worth and said he was approached by an anonymous buyer who wrote out a $500,000 check, which he waved in front of the crowd.  Considering Hastings’ 25,107 population, plus the three muralists who worked on the project, dividing a half million dollars between them would mean $19.91 per person, Stewart said. He asked how many in attendance wanted their share of $19.91. No one raised a hand — so Stewart promptly tore up the check.

Rebecca Harrison of Omaha, who served as the apprentice artist, said working on the project was “inspiring.” The same method in coming up with the mural ideas can serve Hastings on other future projects. “Let this mural be the sparks of your fire whenever your spirits are down, your dreams have been dampened,” she said. “Look back at this mural as a scrapbook and as a guidebook for what can happen when people of this town come together and work toward a common goal.”

Amber Hansen, the assistant artist, praised the Hastings community for welcoming the artists and making them feel at home during their three-month stay. Audience members were invited to write their dreams for Hastings on electric-lit luminaires that were placed at the base of the mural Sunday night.

Sandra Barrera, owner of TaTa and Tutto’s Colombian and Spanish restaurant across the street from the mural, said her dream is for the Hastings community to continue to work together in unity as it did on the mural. Design team member Karla Kral of Juniata, an artist herself, said being a part of the weekly planning and painting meetings was worth the effort. “It’s just breathtaking,” she said as she observed the mural. Loewenstein said final details of the mural will be completed in about a week.
Posted by Dave at 8:23 AM No comments:

Thanks to Assistant Muralist Amber Hansen we have this wonderful time-lapse of the first few weeks of painting the Hastings mural. Click on the image below. 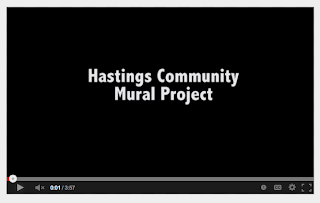