Drawing with kids is illuminating. Kids, up to a certain age, draw the way grown-ups sing in the shower - full-force with heart and emotion and with little concern for how they sound to others. This is especially true when you give them just enough of a prompt to get their wheels turning and then get out of the way. 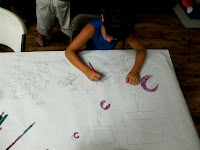 As a part of our design process for the mural, we spent nearly a week talking and working with kids on drawings about their idea of 'home.' Over the course of eight sessions, we worked with more than two-hundred young people from the Boys and Girls Club, YMCA, and Spiva Summer Art Program. The drawings they have made are remarkable - remarkable for their beauty and their honesty, and remarkable especially for the way they examine and illustrate the joy and sorrow of living in a time of confusion and contradiction, on one hand, and unparalleled community spirit on the other. 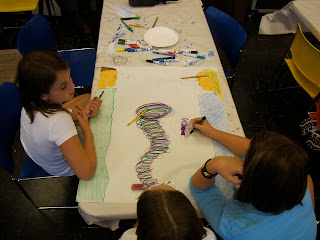 Below are some of their drawings which were made collaboratively, in groups of three, in response to the following cues: 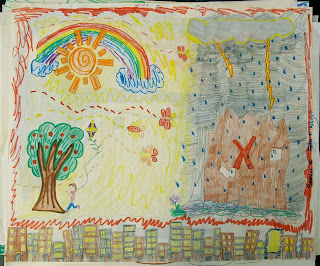 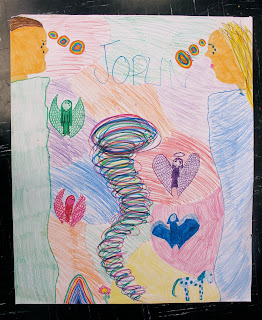 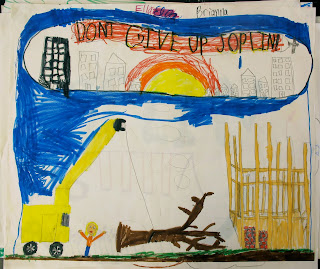 As artworks in their own right - capturing the beauty and in some cases tragedy witnessed by Joplin's young people at this unique moment in history - these drawings deserve to be seen by a wider audience.  We will be showing many of them as a part of the August Third Thursday event. Check back here for details. 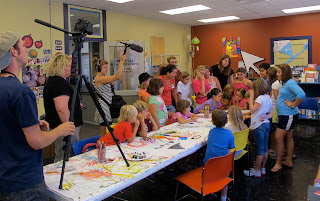 Thanks to Kyle, Josie, Nicholas and Amber for helping to choreograph these sessions.
Posted by Dave at 10:10 PM No comments:

Exciting news. We have a wall for our mural!
Thanks to the generosity of Tom Jensen and all the great folks at Dixie Printing, 1418 S. Main, we will be painting the large south facing wall on the northwest corner of 15th and Main. 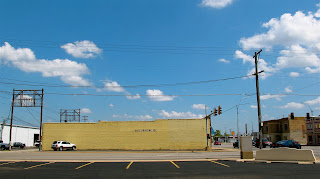 And more good news, we also found a great space for our design studio only a few blocks away from the wall. It's located right across the street from the newly restored Gryphon Building at 1038 Main Street. You can't miss it. It's the one-story building covered with bright red metal siding next door to what looks to be an old gas station. The design studio is where we will hold most of our Design Team meetings,  and where we will make all of the preparatory drawings and color studies for the mural and other art works before they are installed on-site..
Posted by Dave at 1:23 PM 1 comment:

Few people are aware, but the team here in Joplin, under the guise of working on a mural, is actually on a very secret and important mission - Terrapin Rescue and Relocation. It began last year when, while wandering the back streets of Tonakawa, Oklahoma, Nicholas stumbled across a large, angry, and disoriented snapping turtle trying to cross four lanes of traffic that interrupted its drainage ditch habitat. 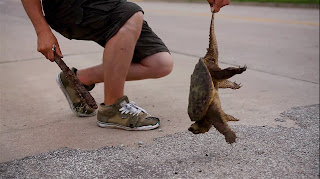 After a short period of getting acquainted, Nicholas was able to grab the angry one by the tail and take it safely out of harms way. Then, just a few days after this, Amber had to stop her car on the interstate to rescue another snapper, this one just a babe no bigger than a silver dollar, but feisty nonetheless.

Which brings us to this morning when, as I went out to get baked goods,  I noticed ahead of me the telltale shape of stranded turtle on the asphalt. 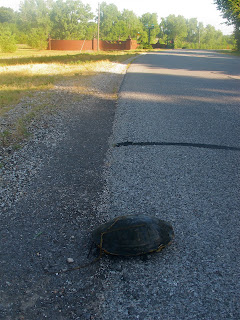 Forgetting  the donuts, I pulled over onto the shoulder and went into rescue mode, guiding the large red-eared slider into a temporary carriage. Our guess is that his or her source of water had dried up under the heat dome we've been living with, and felt the need to cross Lone Elm Road in search of a new and more hospitable home. 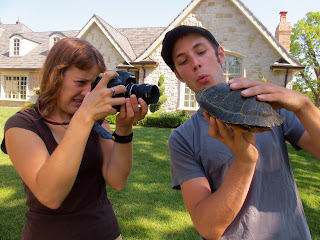 I sent a text ahead to Nicholas and Amber, who, understanding that time was of the essence, met me in the driveway, examined the patient, and then hopped in the car. A couple miles north of home we found access to a beautiful little gurgling creek. Perfect. Nicholas, being the expert, did the honors of releasing our friend into its new environs. Mission accomplished. Now...the mural. 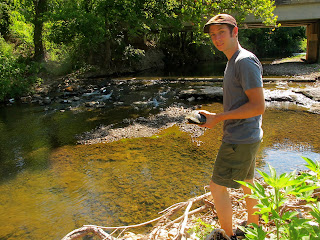 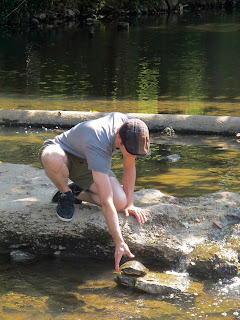 As I often say in my presentation, community-based public art projects like this one are similar in many ways to community theater in that it takes many people and many skills to get to opening night, or in our case to the mural unveiling. Among the countless people who are participating and supporting the Joplin project are a group of professional artists instrumental to its success. Here are some brief introductions.

Amber Hansen, Mural Assistant
Amber, originally from Iowa,  has an MFA from the University of Kansas and is currently the Artist-in-Residence for the KU Art Department. Ms. Hansen is also a talented musician currently playing throughout the Midwest with her band "Your Mom's Best Friend".

Kyle McKenzie, local Mural Apprentice
Kyle, who lives nearby in Webb City, teaches in the art departments at both Pittsburg State University and Missouri Southern State University. Kyle got his MFA from the University of Arkansas and shows his work throughout the region. Check out his website at www.kylejmckenzie.com

Josie Mai, Education Outreach Coordinator
Josie is an Associate Professor of Art and Art Education at Missouri Southern State University. She has an extensive background working with communities from Kenya to Kansas City. She received her MFA from Parsons School of Design in New York City. Learn more about her work at www.josiemai.com

Nicholas Ward, Filmmaker
Nicholas is the co-director and principle cinematographer of a documentary in production about a six-state community mural project, which Joplin is a part of, supported by the Mid-America Arts Alliance. He received his MFA from the University of Kansas and recently returned from an artist residency at the Bemis Center in Omaha, Nebraska.

Ashley Laird, 2nd Mural Assistant
Ashley is a muralist based in Topeka, Kansas where she is currently completing a commission for the Great Mural Wall titled "Reanimating the Arts in Topeka" which focuses on the history and vitality of Topeka's arts community. Ashley recently received her BFA from Washburn University in Topeka and will be joining the Joplin project in August.

After a whirlwind week of meeting folks and giving presentations, I finally feel like I'm getting my bearings here in Joplin. Thanks to all the generous people who have made us feel welcome.

The presentation I've been giving starts with a super-condensed ten-minute art history lesson that begins with the Mona Lisa and then quickly  moves through the development of murals from cave paintings in France to community-based murals in Chicago.
With that as a starting point, and after a little little  background about my work and past avocations as a superhero and aspiring Chicago Cubs pitcher,  I ask "What do you think?" and "What can you imagine in your minds eye for our wall?" It usually spurs an open ended conversation, actually more like a speakeasy where everyone gets to have their say without criticism or interruption. And it's then, when we begin to project our memories and dreams into a shared space, that the design process actually begins.
It's amazing to me how with a little prompting and a serious purpose, people will engage themselves so fully in this difficult task. Especially here in Joplin where the challenges are so great and the troublesome memories so fresh. Witnessing these conversations reminds me how much it seems we need and want to talk to each other, share our stories, and examine experiences in life that perplex and amaze us. And doing this in the service of creating a community artwork, as opposed to meeting at city hall to debate a controversial development project, for example, appears to help humanize and focus the way we talk to each other.


Starting a new mural project in an unfamiliar town, one of the first things I do is to find all the other murals that are already there. I go looking out of curiosity, but also because it can be really helpful to see how other artists have told Joplin's stories through murals as we begin ours. And in Joplin there is a unique and wonderful pair of murals no one should miss. They are the grandfather and grandson pairing of murals by Thomas Hart Benton and his grandson Anthony Benton Gude installed at Joplin's City Hall. And as an added bonus, there is a fabulous display of the preparatory drawings, research materials, and correspondence associated with Thomas Hart Benton's mural. Anyone interested in the process of creating public art should go visit this unique installation on the first floor mezzanine at city hall.
Posted by Dave at 10:30 AM No comments:

Nearly a year ago while finishing The Imagineers mural in Newton, Kansas, we were visited by a small contingent of artists and arts advocates from Joplin, Missouri. Sharon Beshore, her husband Lance, and artist Jorge Leyva made the trip to discuss the possibility of bringing the Mid- America Arts Alliance Mural Project to Joplin the following summer. Nine months of planning, grant writing, and fundraising later and we are here engaged in a project that has taken on dramatic new significance since Joplin was hit by a massive tornado on May 22nd.

In the days following the tornado, plans for the mural project were unsure. Would our Joplin hosts still want to carry it forward? If so, what role could art play as the community worked to recover, restore, and rebuild? And, how would these new circumstances impact the content and type of art we would make? To help answer these questions, Nicholas, Amber, and I traveled to Joplin in early June. There we met at the Spiva Center for the Arts with artists, arts advocates and others who were interested in discussing the purpose and potential  of community-based art in the face of great challenges. The two meetings  were filled with honest thoughtful dialogue about the capacity of art to help in healing and recovery in times of difficulty.  And in the end, those who attended the meetings expressed overwhelming support for doing the mural and possibly a series of temporary art works located in areas affected by the tornado. The project would go forward, there was no doubt.

We arrived in Joplin to begin in earnest on July 11th. Venturing out from our new home base (the world's most wonderful basement apartment kindly opened to us by our hosts the Beshores), we began  by driving south through downtown to view some impromptu murals that had been painted as signs of hope and encouragement in response to the tornado.