Arkadelphia's completed mural - "From a Dream to The Promise"

With the help of over two-hundred community volunteers.

The mural is 24 feet tall and 65 feet long painted on the west facing wall of the Honeycomb Restaurant at 705 Main Street.

Scroll down to read a description of the imagery in the mural.

The main theme for our mural is Education. Within that theme, we have been guided by the phrase, “The journey from a dream to the promise.” The architecture of the composition is built from the combined ideas of an Arch, a Bridge, and a Porch / Stage.

Framing the Arch at the upper left and right are soaring pine trees reaching up to the sky with a Cockaded Woodpecker on the left (an endangered species protected by the Ross Foundation) and a majestic Blue Heron on the right commonly seen in the area’s rivers and lakes. 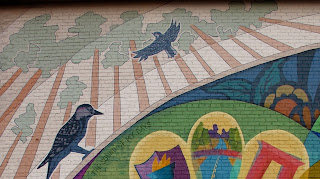 At the base of the arch is a series of panels that from left to right represent:
1) The heart of a pine tree, revealing its history and symbolizing ours
2) Caddo pottery decoration
3) Honeycomb as a reference to the Group Living restaurant where the mural is painted

Within the Arch is a tableau that celebrates Arkadelphia’s leadership in education. Beginning at the far left, a young man sits on the porch holding a pine tree seedling (symbolizing his potential) while gazing into his uncertain future and toward aspirations of Ouachita & Henderson universities, and early educational leaders Julius Rosenwald and Booker T. Washington, who set the ground work for Peake School and thousands of others like it in the 1920’s and 30’s. Above and to his right, is a quote from a poem by the Arkadelphia writer and humanitarian John Allen Adams which reads "I walk toward the sound of my days." 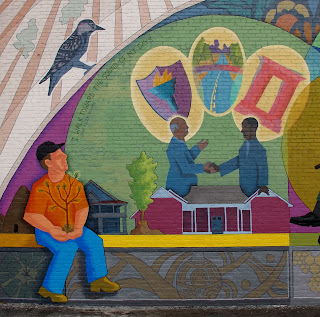 Beyond those aspirations, the young man looks towards a dynamic allegorical figure, with a dress embellished with keys to unlock ones potential and dreams. She symbolizes the many past and present mentors and teachers who have helped guide Arkadelphia’s young people. As she is conjured up and made real by a fashion designer, inspired by Arkadelphia native Martha Dixon, and her apprentice on the steps, the symbolic mentor extends her hand as an invitation to the young man and gestures toward Arkadelphia’s Promise, which is illuminated under the lantern she carries. 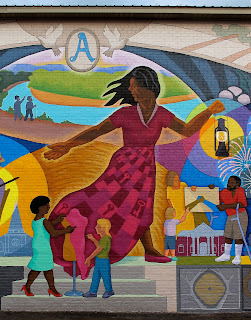 The kick-off ceremony for The Promise at Arkadelphia High School, accompanied by fireworks and music, completes the educational dream of the young man who we see again at the far right. In one hand he carries his diploma and with the other he passes along the symbolic pine seedling to a new student who will soon begin her own journey. 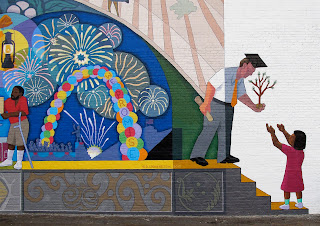 This story is enhanced with specific references to Arkadelphia and Clark County.  Along the length of the porch are references to important institutions and architecture including Caddo dwellings, Hill’s Café, Peake School, a church, the public library, and the high school stadium.

At center left, a fiddle player sits on the porch and plays the folk tune that is the story of the mural. His music resonates throughout and reminds us that we need to actively maintain a community of giving teachers and mentors who can lead the way for Arkadelphia’s young people. 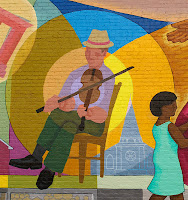 At the center right, we see a group from our mural design team engaged in the process that has led us here. They / we  have given our time to do what the fiddle player symbolizes –  telling the story of this community’s commitment to giving each person the tools and resources they need to be able to reach their full potential. 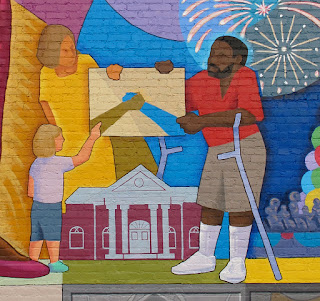 In the center above and behind the figure for education, is an iconic view of the Ouachita River from the Bluff. Looking out from its edge are the explorers Hunter and Dunbar who were among the first people to map this region. In the background just below the Bluff, the rings of a giant tree (inspired by the Ross Foundation’s remarkable lobby) connect the story from dream to promise.

To the right and left of the Bluff, are panels with decorations inspired by designs on the old Arkadelphia High School. And at the very top center, an illuminated letter A for Arkadelphia is carried forward by doves of peace.

A sincere thank you to all who helped bring this project to life, give it form, and carry it forward. 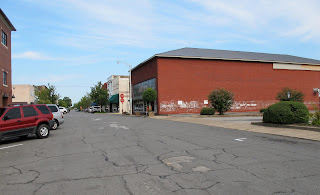 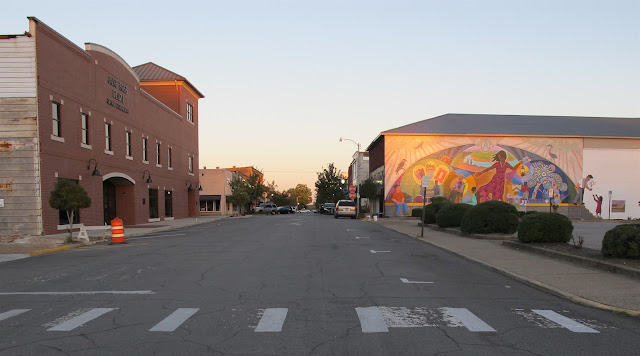 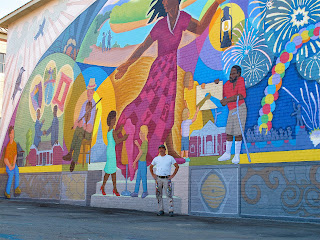 The following post is from mural apprentice Jordan Karpe.

On one of our final days here in Arkadelphia the sky was threatening rain. The clouds were growing darker, and people passing by casually mentioned imminent inundation. Not a single drop fell though, and the mural was coated in varnish marking the completion of the project. After more than three months of living in town, I spent one of my last days frantically brushing clear coat plastic onto the wall and consequently myself. The smell wasn't too agreeable, and peeling it off my skin took awhile, but there was an immense moment of relief when it was done. My mind is wrapping itself around these last few months, the experiences, the friendships, and the lessons.

I've grown incredibly fond of this community mural process. It combines a lot of things I enjoy: people, public art, history, community, and lots of wonderful free food. But really just the idea that the work I've been a part of has evoked such positive responses gives me hope. The observations I've had on a living, breathing community has been fascinating. People are fascinating. Overwhelmingly the response to the mural has been supportive. So many individuals walk by and gaze upwards, chatting with their friends. Some are even brave enough to offer a kind word of encouragement. And the circumstances that helped formulate the design brought people together, and I saw people engaging with one another.

It's people engaging, not exchanging pleasantries, not smiling politely, but having conversations that instills hope in me. But I recognize how hard that can be. Everyone interacts differently, and each person comes equipped with a differing set of personal outlooks and ideas of conduct. Naturally, that can lead to some conflicts, but those conflicts aren't necessarily bad. This project has pushed people together, and I hope members of the design team maintain that air of camaraderie once Dave, Ashley, and I leave. I hope new friendships were formed in this community and that they persist. The mural is a testament to what a diverse group of people can accomplish. I hope the artists who contributed feel inspired to further collaborate. I hope all the self-identified non-artists feel empowered to be creative. A mural doesn't require a degree, or a pedantic grasp of terminology, or an expert, just people willing to engage. Dave certainly knows the ropes. He is no slouch of a painter, but I'm continually impressed by the way he engages with people.

I wish I had more time to personally thank all the gracious friends we've made. Each person from the design team and Group Living, to Dave and Ashley has brought light to my life. I could not imagine a better first project to learn from. Though there will be more murals, I can guarantee Arkadelphia will hold a special place. But for the moment, I'm ready to head home to see my dog.
- Jordan Karpe

Click the link below to read this story in the Arkansas Democrat-Gazette.

"City's mural dedicated; work remains to be done"
Posted by Dave at 6:22 AM No comments:

It was a bit cooler than we had expected, but the rain let up, sun came out, and our mural celebration / dedication went off without a hitch. A crowd of sixty plus gathered at the base of mural to listen to the Cedar Grove Bluegrass Band before Project Coordinator Farrell Ford began the program. 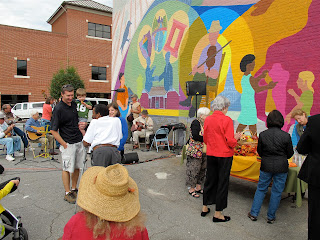 Speakers included mayor Charles Hollingshead, mural apprentice Jordan Karpe, Group Living Executive Director Jane Lucas, design team members Mariela and Natalie Crockett, mural assistant Ashley Jane Laird, and then yours truly.
An explanation was in order, since many were asking whether the mural was finished. The answer no, not yet. I like to schedule the mural celebration a week or so before the mural is finished. Why? Because I like the mural team to have uninterrupted time at the end of the project to finish things up and do the detailed work without worrying about speeches and such. After all the talking, it was time to enjoy home baked cookies and lemonade while the band played on. 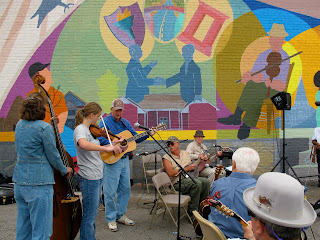 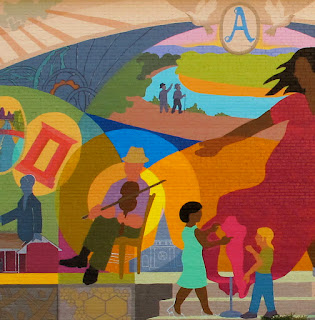